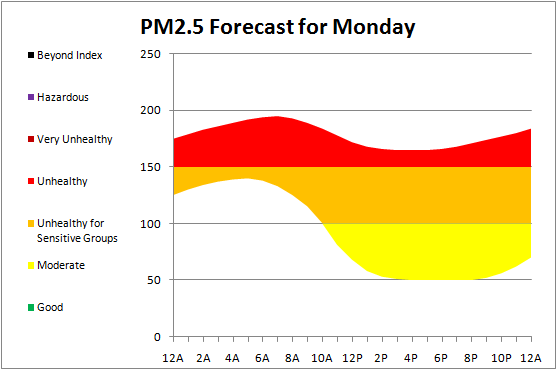 Our forecast for Monday is slightly less positive than it was yesterday, but we're still almost certain that we will see better than average air quality for the day.  After seeing Unhealthy conditions overnight, look for decreasing pollution in the morning and early afternoon.  We could drop as low as Moderate on the AQI scale during the afternoon hours.

TUESDAY, July 22:  There is a very good chance that the better than average air quality from Monday will carry over to Tuesday, but right now it looks like Tuesday's air quality will probably not be quite as good as Monday's.

WEDNESDAY, July 23:  Our most likely outcome for Wednesday is a return to average conditions, so we can expect AQI readings at Unhealthy or Unhealthy for Sensitive Groups throughout the day.

THURSDAY, July 24:  Thursday should give us similar conditions, about average with AQI readings at Unhealthy or Unhealthy for Sensitive Groups.